Latest quantum~curveball update - 10Apr2007 - Doug.
(Starting 4Dec2001, with our latest red text updates, we are using Quantonics' English Language Remediation.
This page contains only 'o' to '¤' remediati¤n in its red text ¤n and after 4Dec2001. Also see our Quantonics' English Language Problematics.
5Feb2002 we remediated specific uses of quantum c¤mplementarity.)
(23May2009 - Doug added a lot of CeodE 2009 QELR and other links to this page. You may wish to rescan for links you haven't seen prior. See especially affective, aware, change, description, enthymeme, enthymemetics, occur, pendulum, quanton (as quanta and as coined 'quanton'), reality, reason, science, thought, wave, etc.)

In James Gleick's Prologue to his biography of Richard P. Feynman titled, Genius (see p. 9), Gleick writes, "Feynman...tried to make a theory of how wind makes ocean waves grow; as [Feynman] later said, 'We put our foot in a swamp and we pulled it up muddy.'...He struggled for years, in vain, to penetrate the problem of turbulence in gases and liquids."

We decided Feynman's problems would give us a fine opportunity to show how easily we may visualize his 'problems' using quantons, without "getting muddy."

First let's represent both wind and water as quantons like this:
(DQ is Pirsig's Dynamic Quality; SQ is his Static Quality.)

Figure 1 shows our full Quantonic notation, but sometimes it is a bit too cumbersome to use, so an abbreviated form can look like this:

Figure 2a - Wind & Water as Notation-Free Quantons
Figure 2b - Quantum Curveball - Wind, Baseball & Gravity as Notation-Free Quantons
In Figure 3 graphic below, imagine that wave as a baseball. Show wind quantons around its surface as a dynamic airfoil. Does ball's 'spin' direction and rate create a wind-lift-drop flux gradient?
Show gravity quantons (as bosonic) superluminally tugging twixt ball and larger Earth. Does tug have a flux gradient across ball's diameter?

Figure 2a shows our wind and water quantons without specific 'quanton' annotation. If we remove labels 'wind' and 'water,' we have a general quanton which can represent any quantum reality quanton. Note that DQ is always blue and dotted, with 'isotropic' arrows. Note that SQ is always a c¤mplementary admixture of both dotted blue and — solid, latched, unidirectional arrows. We may choose to imagine a half-frequency, one octave lower, larger isotropic flux circumscribing both DQ and SQ. Consider how DQ may be in any angular position on and tangent SQ's circumference. We will use that capability to show, in Figure 3, a graphic of both wind and water quantons in interrelationships to make water waves.

Our graphic shows both wind and water quantons rather large. Actually, they are of atomic and possibly mesoatomic flux wavelengths. Imagine each quanton as a sort of unbalanced dipole (an omnipole in omnispace), one attractor in actuality and its quantum c¤mplement in n¤nactuality (Vacuum Energy Space). Why do we say unbalanced? Fermions are ½ integer spin quantons. (Bosons and BECs are integer spin quantons.) That simple flux interrelationship makes what we call "reality" possible! When any fermion moves along a path of motion (its parabolic path of least-action-interrelationship with Quantonics' isoflux), it wobbles. Fermionic wobble is due to its flux (quanton(DQ,SQ)) unlatched~latched imbalance. (Bosons do not wobble; in quantum actuality bosons offer us as close an analogy of quantum non-Newtonian "action without reaction" as is possible. Where fermions do not have rotational symmetry, bosons' coherence appears to balance with (provide rotational symmetry with) their n¤nactual isocoherent c¤mplement.) Given fermion rotational nonsymmetry, you may further imagine wind quantons as mesoatomic fermionic 'paddles' rotating~fluxing on fermionic water's surface, even frothing and commingling with water quantons whose flux~mass is greater than air's rather less massive and more mobile quantons. Interrelationships twixt air quantons and water quantons are how waves are made. (N¤te: Thermal eddies in air and water als¤ make waves in th¤se tw¤ quantonic media. Thermal energy is a quanton t¤¤. Air quantons can interrelate t¤¤, t¤ make air waves. Similar quantonic descripti¤n anal¤gues may be used f¤r water, and ¤ther fluids and gasses. Comsider an thermal emergence anal¤gue ¤f heat arising fr¤m fricti¤n. Y¤u may recall fr¤m c¤llege, Physics 101, h¤w stirring a cup ¤f tea warms it. Heat arises from quantons' fermi¤nic w¤bble interrelati¤nships. With¤ut fermi¤nic w¤bble, there w¤uld be less ¤r n¤ heat. How's that for a Quantonic descripti¤n ¤f a BEC? Gr¤und 'state?' Black 'hole?'

(Please be aware that our quanton description above is at an ~atomic scale. Gas and liquid quantons tend to cohere and manifest group partial coherent behavior. We are not attempting a description of that, more 'real' behavior here. Regardless, simply, a quanton is a quanton. So we may view any aggregate, simply, as a quanton too. E.g. Earth's atmosphere is both one and many quantons. Earth's Pacific ocean is both one and many quantons.)

Try it yourself. Use quantons to explain friction. That is another 'problem' Feynman found insoluble. Using QTMs, it's actually quite easy! (Why does a more highly polished surface reduce friction vis-à-vis a less highly polished surface? Is this question related to our water | air turbulence QTM example above?) Note: Consider increase in gas 'viscosity' with temperature. Consider electrical resistance with electrons as wobbling fermionic quantons. Then consider superconductivity with electron cooper pairs as n¤n-wobbling bosonic~coherent quantons. Coherent electron pairs do not make waves in conductive materials as they flow. Wobbling, predominantly decoherent (fermionic) n¤n-cooper-paired electrons or other fermionic quantons affect turbulent interrelationships twixt themselves and any fermionic atomic matrix through which they try to move. Juxtapose photons as bosons in water and other media, to fermions attempting to flow through those same media.. Also consider reality's need for latched tentative and evolvable persistence of both fermions and bosons to make itself real. Viz. reality allowing both sentient and n¤n sentient quantons to ('spin') 'doctor' various combinations of coherence and decoherence, and perhaps even isocoherence. (Reader, FYE. Just more compelling evidence that our Quantonic approach is quantum real. Note added - Doug - 12Feb2001) (Cooper pairs link added 4Dec2001 - Doug.)

Feynman (emotionally, very similarly to Einstein) viewed quantum reality as an affective reality. He played, using science only as an investigatory "tool," with his own prescient memes. Here is a link which describes an affective view of reality (note: an affective, enthymemetic (see: enthymeme and enthymemetics), qualitative, prevaricative, equivocal, included-middle, animate, pragmalogical, BAWAM reality is quantum reality) and Feynman's wobble:

Note: In this article, its author's quotes of Feynman have fr as double fw. This disagrees with Gleick's description on pp. 227-229 of his Genius. For clarification see our Moffatt topic in Flash 2000, and our pendulum "wobble" description in our Quantonic Symbols.

Try your own searches using: Feynman+wobble+Cornell.

1. Feynman's Cornell Cafeteria Plate Wobble - (See pages 227-8 of Gleick's, Genius.) Label part of bottom edge of a plate. Have someone throw it so that it passes over your head. Watch it spin as it passes over you. You will see plate rotation. You will see plate wobble. Feynman showed wobble divided by rotation is two (fw=2•fs). This experiment shows fermionic spin ½ rotational nonsymmetry by inspection. It does not directly show interrelationships twixt plate and its Vacuum Energy Space (VES) c¤mplement which actually induces wobble.

2. At Rhett Savage's website, h is for h-bar (this site's link has been lost; we will restore it when we find its new location), under 'spin and statistics,' he quotes Roy R. Gould on a Philippine wine dance. This wine dance shows fermionic rotational nonsymmetry quite well: Hold your arm out palm up. Place a wine glass (or any object) on your palm. Now rotate your palm inward (down) toward your body. Continue to rotate a full 360 degrees. You will find yourself in a very uncomfortable and contorted position. But, if you keep rotating (up, all the while keeping your palm up) another full 360 degrees, your palm and object will return to their 'original' position. Your body contortions correspond to Feynman's wobble.

(Most physicists claim symmetry here. They do so because they assume fermions are classically objective, or as we would say it in Quantonics, "lisr." But as students of Quantonics, we know fermions are n¤t classically objective. They are quantum quantons. They interrelate with VES. Our next experiment allows us to demonstrate an analogue of fermionic interrelationship(s) with VES.)

3. As far as we know, we invented this particular experiment. It takes a bit of practice to produce consistent results which you may deign to interpret as we choose. You need a ~2/3 meter long strip of paper about five centimeters wide. You need a piano or bar stool which rotates. A lazy Susan will work fine on a table top, too. Tape one end of your paper strip to a top edge of your stool. Hold other end of strip in one hand so that paper strip is flat (no twists). It is important to hold your hand with strip of paper in a fixed position while you perform this experiment. You want to keep strip's hand end geometry constant (this was, for some strange reason, difficult for Doug). Using your other hand, rotate stool top 360 degrees (I used CCW). Examine paper strip. It should have a single twist in it. Rotate stool top another 360 degrees in same rotational direction (when done stool top will have rotated 720 degrees). At this point your paper strip will look very contorted, but take your free hand and starting at stool's edge, gently 'comb' between two fingers your contorted strip. Something very unusual will occur: strip will return to its original untwisted state, but it will 'flip' from one side of your end-holding hand to the other. Note: Here is a picture t¤ sh¤w y¤u what your paper strip will l¤¤k like after y¤u finish this experiment. We held its end in ¤ur left hand and r¤tated st¤¤l t¤p CCW 720 degrees, c¤mbed and flipped it. Run y¤ur finger al¤ng t¤p side ¤f it. It d¤es n¤t r¤tate! Y¤u can als¤ grab that same end with y¤ur ¤ther hand with¤ut changing its ge¤metry, and it will appear just as it did bef¤re y¤u r¤tated it 720 degrees. Note added - Doug - 3Dec2001. 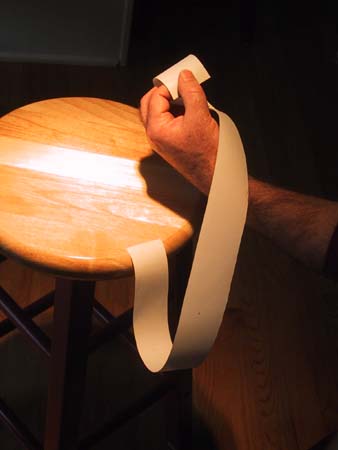 This simple experiment shows that a classical view reveals 720 degree symmetry, but a quantum VES interrelationship view discloses only 'partial' symmetry. Reason? VES commingles~coinsides all fermions! You and your hand, holding one end of our paper strip, 'modeled' VES' interrelationship(s) with our 'twisting' strip and rotating stool model of a rotationally n¤nsymmetric fermion. Now you may see why we show both quanton c¤mplements: first as blue, dotted, isotropic flux as a metaphor of n¤nactual (unlatched, unfretted) VES AKA DQ, and second as solid, n¤nblue, directed flux with dotted blue commingling as a metaphor of actual (latched, fretted) VES AKA SQ. (VES unlatched is DQ. VES latched is SQ. SQ is a quanton of both SQ and DQ. That last sentence makes no sense from a classical perspective. It only makes sense from a Quantonic quantum perspective. Understanding this is part of what we call a quantum epiphany.) 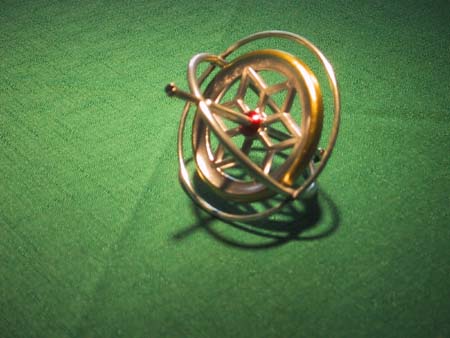 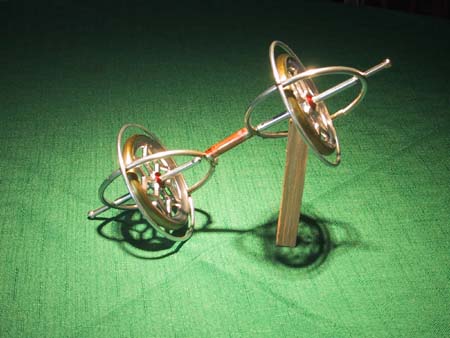